Ok Ladies and Gents!  Grab a big glass of chardonnay, and get comfortable!  We have Dawn Chandler, Author of Historical Romance and Fantasy  with us today!

I was born in Coffeyville, Kansas in 1973, but don’t remember much about it, though I have recently had the opportunity to visit there with my husband, Rod Chandler II. I very much enjoyed the Dalton Museum (I always thought I should have been born in the Wild West). I moved to Idaho when I was 6 and moved around a little bit while my parents got settled. I went to Wendell and Jerome grade schools before moving to Murtaugh in 2nd grade. I grew up on Murtaugh Lake, my father, Marvin Oral Benefiel, was the dam keeper and the ditch rider. I spent my days in the lake, swimming, catching fish and tadpoles, from sunup to sundown most days. Imagine; my first full length novel was about a mermaid. 🙂 At nights I would spend my time watching football with dad or cooking with my mom, Jo Ann Walker. In 5th grade I had a teacher, Mrs. Smith, who wanted me to publish one of my short stories. Looking back on it I should have done so, I would have been an author before now, but

I was not ready to be published back then. When I first started writing in class I hated it. I had to write their way and only their way. In the correct process, outline, rough draft and so on. Well I have learned in the progressing years that I am a seat of the pants author, but in the beginning I just thought that writing was not for me. I could not, no matter how I tried, get the outline done. I could not sit and sketch out a whole story from beginning to end. I found quickly that if I just sat and wrote I could get the first draft out without a problem, but the teachers didn’t want me to do it that way. I really began to love writing when I met Mrs. Smith and she told me that I could write it in whichever order I wanted. She understood me as a writer and didn’t push me to be something I wasn’t. I have been writing ever since. In 8th grade my parents divorced and we moved to Wendell where I met my first husband, Lomax Charles Cannon. (I learned there that I had also known him in kindergarten and had spent time at his house. His mom laughed one time after we were married and told me that in kindergarten I had come to her and told her that I was going to marry her son…she had laughed and told me she didn’t think so, I showed her) When I was 16 my father and his mom moved back to Kansas. The next year they had both passed away. He had a ruptured ulcer and my grandmother from age. At 18 Lomax and I had been married for a year and had two kids, Charles and Cynthia, and we were buying our first house. In 1999 we bought our second house and started renting out our first one. LoMax had been sick when I met him with an autoimmune disease that he had been born with and not long after we had moved into our 2nd house he had a couple of strokes and was bedridden for almost 5 years before he passed away. I was working three jobs, dealing with a bedridden husband and two children; needless to say, I did not get in much writing time. In 2006 LoMax passed away and we ended up moving back to Jerome. A little over a year later I met my current husband, Rod. He pushed me into getting back into writing and actually looking into getting published instead of just writing for me. I am grateful to have his support and the support of my children and his. Together we have 7, Charles, Cynthia, Kara, Mary, Tina, Pam and Richie. I love them all dearly and am happy to have them in my life. Well that is the very short version of my life, some of which I am sure you nice people will only want to know after I am famous, but that brings us to today. Today I am busily writing my novels, The Dark Lady, soon to be released, through Black Opal Books, The Infamous A.H. to follow shortly (fingers crossed) after and about 50 more started in the computer that will be released as time and my muse allows. Now that my kids are all grown up, I like to spend time on the semi with my husband, Rod, and to see the country. I love visiting all the small towns that I have been to and am grateful to all the nice people I have met. I am also looking forward to meeting several author friends that I have made in my adventures into the publishing world. I enjoy swimming (if you haven’t guessed that so far), camping, four wheeling with our 4 X 4 group, spending time with family and friends, hiking, writing (of course), drawing, painting, reading (a vastly wide list of authors, my favorite though is Stephen King), and I love take pictures as we travel the countryside (if I am lucky we are not in a big hurry and can even stop to take them).

Tell us about The Dark Lady! 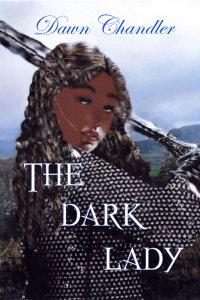 Vanessa Fordella should have grown up in luxury and ease with a father that doted on her. Instead, forced into a life of danger and deception, she quickly becomes Van, the boy. Large for a girl and uneven of temper she excelled. For years she enjoyed being the Dark Knight and then a message tears her beloved world apart. At her mother’s dying request she agrees to leave behind her charade and marry.

Peter Lawston came home from the war with ideas of a simple and peaceful life. Pain and betrayal dictates the kind of man he is and the kind of wife he desires. When his father grows ill Peter reluctantly agrees to marry. As the carriage draws up Peter is hoping for a shy and controllable wife. What arrives instead is a woman full of pent up aggression who doesn’t know the first thing about being docile or obedient.

Peter and Van struggle for power and control. They fall in love quickly, but her secret past is always a strain between them. Van doesn’t know how to let go of the knight that she has always been and struggles to become the woman and wife that she is expected to be. Both must give up their difficult past if they hope to have any kind of a future.

Wow, that sounds amazing!  This is going on our Kindle for sure!  Thank you so much for joining us!  We look forward to having you back again soon!

7 thoughts on “Dawn Chandler is on our Friday Spotlight!”